Year4
All On Board!
As so often I began by singing ‘Hello Everyone’ using some pitches that the class are familiar with; in this case I used the pitches ‘la’, ‘so’ and ‘mi’ (‘lsm’ or in note names A, G & E). There are three classes in each year group and the first time I did this lesson I made this activity too hard by singing difficult intervals; it was not a good way to open the lesson. It’s important to have something familiar and manageable to start with.

I am thinking about starting more lessons with a song as the ‘Hello Everyone’ can sometimes feel repetitive and not lively enough as an opener.
I warned the class that there was going to be some intensive ‘sitting and thinking’ work and that this would be followed by a lively activity and a game. Having done some work with ‘lsm’ I told the class that I would sing a song in my Thinking Voice and show the handsigns. The class had to identify the song. I sang ‘Row Boys Row’: 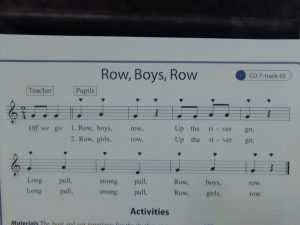 A few incorrect suggestions more or less fitted the rhythm (e.g. Hot Cross Buns or Pease Pudding) and then someone guessed this song. With the class standing everyone ‘rowed’ to the beat. It took a few attempts to have everyone in the class working as one. It’s difficult to judge, when someone does not join in with a fairly straightforward and not embarrassing activity, what the best reaction is: No reaction at all? Gentle encouragement? Firm insistence? A move towards paired work? Step in and do it with them?
Next I sang this song two beats behind the class. “What did I just do?” We recalled the word ‘canon’ to describe this. Next the class worked in pairs to work out the rhythm of this song (using their knowledge of rhythm names ta/crotchet and ti-ti/quaver) then we went on to work out the solfa (or pitch names). Most of the class could work out the rhythm. The number who are confident working out the solfa is smaller, perhaps about half of the class. We read through the stick notation together and then I rubbed out the first half of the song.
What is left is the tune of ‘Round and Round’, a simple song from last year; the class did not really recall this. I moved on quickly. We looked at the rhythm (7 crotchets in a row with a rest at the end). I hummed the song ‘See My Clock’. The class knew this and they sang it showing the pitch on heads, shoulders and hips. I saw that most dipped their hands down to their knees for the final lower pitch. This was reassuring as I intended to introduce them to this new pitch today and it’s important they can hear it is lower. In pairs the class worked out the melody of the first phrase using pitch names. For the second half it was necessary for me to introduce the new pitch ‘do’ with a new handsign to accompany it.
After all this earnest analysis it was time for something active. With everyone standing I taught them the Bubblegum rhyme*. I then taught them the actions, these are quite tricky at first and there was some laughter and sideways glances to see who could do it and who was struggling.
We finished by singing Oranges and Lemons and playing the circle game where somebody gets caught on the last line ‘Here Comes a Chopper to Chop Off Your Head’! They love this. And it’s such a perfect song for us in Poplar, East London, because it mentions local places that the children know: Shoreditch, Stepney and Bow.
Everyone leaves having had some good fun and a laugh at the end.

*’Singing Games and Rhymes for Middle Years’ by Lucinda Geoghegan