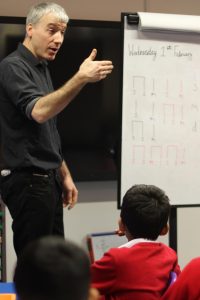 I started teaching at Newington Green Primary School in Islington, North London, in 2001. I soon became the music subject leader running a small choir and leading singing assemblies and I enjoyed teaching my own classes songs which I accompanied on guitar. In 2010 I was offered the chance to be the school’s fulltime music teacher. A couple of years before this I had visited Gallions Primary School in Newham and fortunately I recalled the name Kodály from this occasion. I googled the name and came across the British Kodály Academy (BKA). I went on the BKA’s 2010 Summer Course and over the week I realised that this was a very effective way of teaching groups of children music in a fun and meaningful way. For the next three years I studied with the BKA. In 2013 I moved on to a large primary school in East London where I taught music from Nursery to Year 6. In 2017 I had to move on again and I feel very lucky to have arrived at Rhyl Primary School in Camden. I remember when I started teaching at Newington Green people would say that Camden is a good borough to work in. I agree.