All in a circle I remind them of the sea shanty song from last week. We sing ‘I’ve Been to Harlem’ without any warm up. The whole lesson is 30 minutes so I treat this first run-through as a warm up! I encourage the class to rock from one foot to the other on a slower tempo (minims). During a second run-through I produce a lightweight plastic football. In response the singing picks up a little in anticipation of a game*.

This involves passing the ball around the circle to our slower beat and passing the ball across the circle every time the word ‘over’ is sung. I often tell the children that they need more than one brain to be a musician. The simultaneous activities required in the game provide an illustration of this:
1. Singing/remembering the words
2. Passing a ball to the beat
3. Remembering to pass the ball across the circle on the word ‘over’
The four Year 5 classes that I did this game with all improved their singing and their levels of coordination during the ten minutes or so of playing this game.
Next the class came and sat in front of the whiteboard. I had written a vertical ‘note ladder’ with ‘l – s – m – r – d’ indicating five pitches of a pentatonic scale. I had also written ‘Form’ and underneath ‘A Av B Bv’. I hummed a few four beat phrases using these pitches for the class to sing back with the pitch names and accompanying handsigns. I started with the very simple and progressed to more complex ones. I supported the children by sometimes doing the handsigns myself with the class and sometimes pointing to the note ladder. I held up a xylophone (with some of the bars removed to show the same shape as the note ladder) and played the final phrase to remind them where this pentatonic scale sits on the instrument.
Next I pointed to ‘Form’ and asked what this meant. Some children, though certainly not all, recalled our work looking at the form of simple songs. I explained that we can make a simple tune using the pentatonic pitches we have been working with and a simple ‘A Av B Bv’ form. A volunteer provided a simple 4-beat rhythm. I wrote this down twice (for A and Av). Next I asked for a tune to fit our first 4-beat phrase. In one class a pupil sang a simple so/mi tune, in another class a two two note ‘do/re’ tune. I allowed use of the xylophone to support the tune invention in another class. A variant was made by keeping the beginning the same and altering the ending. We repeated this for the second pair of phrases. 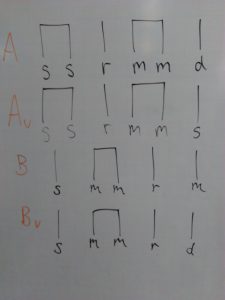 This is not something I have ever done before and it was reassuring that the children seemed interested by the novelty and the challenge of it. They sang it through. I suddenly realised that we could increase the challenge by memorising it. I employed a strategy I have used before when classes have memorised rhythm sequences: one phrase is removed at a time. After each removal the whole thing is sung again. I heard previously disinterested boys saying things like ‘That’s easy’ and rising to the challenge. To finish I asked if anyone could play the whole thing on the xylophone. It wasn’t hard to find children who could.
If musicianship is to really know and understand what you are playing or singing then this lesson demonstrated the principle very well. I finished by explaining that the children could make their own tunes next week in small groups using small whiteboards and with the help of xylophones. Although of course I will expect them all to sing their melodies.
*This is a simpler version of the game found in Lucinda Geoghegan’s ‘Singing Games and Rhymes for Middle Years’.